WASHINGTON – Traveling with Israel’s first-ever Orthodox prime minister wasn’t supposed to be that different. His spokesman did send out a moving photo of him praying with tallit and tefillin on the morning before his scheduled meeting with US President Joe Biden.

Other than that, it was standard operating procedure, until midday Thursday, when it became clear following the ISIS attack at Kabul’s airport that Prime Minister Naftali Bennett was not going to be able to meet with Biden until the next day.

But a meeting on Friday meant there was no way to fly back to Israel in time for Shabbat, and we were going to be stuck in Washington for two and a half days longer than planned. 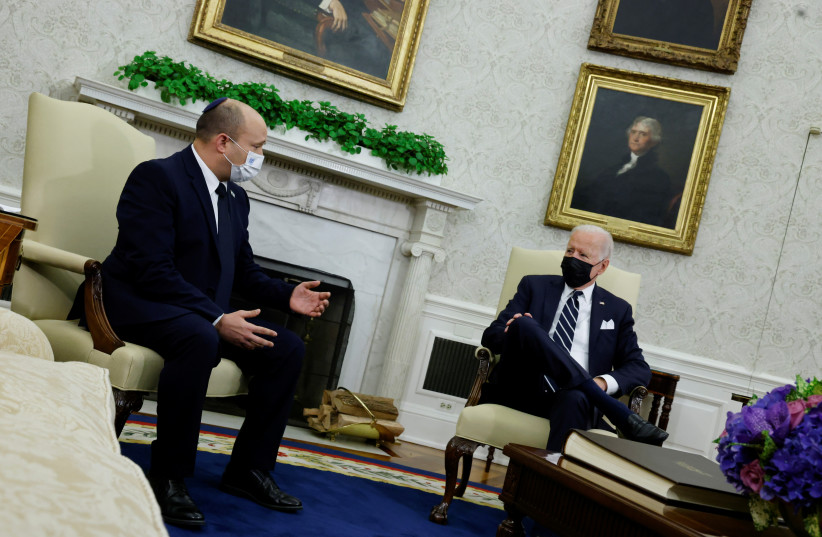 US President Joe Biden and Israel’s Prime Minister Naftali Bennett chat during a meeting in the Oval Office at the White House in Washington, US (credit: JONATHAN ERNST / REUTERS)

There have been prime minister’s trips over Shabbat before; the Prime Minister’s Office doesn’t travel on Saturdays as a policy. But this was the first emergency Shabbat stay anyone in the delegation could remember, including legendary Yediot Aharonot columnist Nahum Barnea, who has traveled with every prime minister since Golda Meir. And this was the first Shabbat stay by a prime minister in a COVID-19 capsule, meaning the entire delegation could not leave the hotel.

The Israeli Embassy in Washington jumped into action to make Shabbat happen for Bennett and his entourage, so many of whom are also Orthodox, organizing a Shabbat dinner and a suite-turned-synagogue thanks to American Friends of Lubavitch (Chabad) and the Chabad Israeli Center in Rockville.

But the embassy only organized Friday night dinner, which left the Shabbat-observing journalists, including this reporter and those from Times of Israel, Arutz Sheva and Makor Rishon and Army Radio to try to figure out how to organize kosher food for Shabbat when we were not allowed to go anywhere to get it.

I started doing research. The kosher restaurants that deliver in the area seemed to all be closed on Fridays. I downloaded Instacart, an app used to hire someone to go to the supermarket, buy things and deliver them to you. Snacks and produce for Shabbat were all there and delivered in a timely manner, but kosher cold cuts proved more elusive in the supermarkets within a short radius of the hotel.

In my frustration, I tweeted a screenshot showing that the search for kosher food turned up such not-so-useful results, such as organic matzo and chicken consommé – from Manischewitz, of course.

That brought in a wave of offers of hospitality from Jewish Twitter followers from the DC-area community, which was truly heartwarming. Dozens of people I had never met reached out to offer to bring us food and a Torah to use for morning services.

In the end, Lazer Berman, the Times of Israel reporter who had once lived in Washington, enlisted a friend to bring us some Empire turkey pastrami, vegetables, an array of Trader Joe’s spreads, kosher wine and most importantly – black-and-white cookies.

Of course, we were frantically trying to handle the Shabbat logistics while also working, texting about deli meat sitting in the White House Press Room and at the same time sending news updates back to Jerusalem. Somehow I pulled it off: After Bennett’s midday meeting with Biden and his briefing to the media in the late afternoon, I filed an analysis just minutes before Shabbat.

BACK AT the hotel, the ballroom was set up with a long buffet table, with challot and Israeli wine. At the far end stood another table with Shabbat candles for the women to light. Everyone was standing around the room in clumps – some Bennett advisers here, Shin Bet (Israel Security Agency) guards there and intrepid reporters awkwardly trying to get them to talk to us.

Bennett walked in with the energy of a Bnei Akiva counselor ready to start a Shabbaton. He stood at the buffet table and said a few words of Torah about leadership. But when told there was still another 10 minutes until Shabbat, he launched into a second lesson, comparing the sins of kings Saul and David and their repentance. The bottom line was that a leader is judged not only by his mistakes, but by whether he owns up to and learns from them.

Erev Shabbat prayers began, with Arutz Sheva’s Yoni Kempinski ably serving as hazan and with the participants singing aloud. Bennett said the mourner’s kaddish because it was his father’s yahrzeit, and when the prayers ended, he turned around to the small makeshift women’s section behind him and wished us a Shabbat shalom.

“That was very special,” he said of the prayer service.

Indeed it was. Even while on a work assignment thousands of miles from home, the special atmosphere of Shabbat that we had worked to create despite the circumstances was palpable.

During dinner, Bennett walked around and talked to the journalists, asking everyone how they were managing being stuck in Washington for an extra couple of days. Asked how he planned to pass the Shabbat, the prime minister said he ordered four books. And then he left early.

Later that night, the journalists sat around chatting, noting among other things how Bennett is friendlier to us than Netanyahu, who is famously (and to a great extent justifiably) suspicious of the media, and reminiscing about past work travels.

Barnea held court, regaling the other reporters with stories of former prime ministers Yitzhak Rabin’s and Shimon Peres’s drinking habits and ambassadorial sex scandals. When a couple of embassy staffers who don’t speak Hebrew passed by, I tried to explain to them that this was the Israeli equivalent of having Bob Woodward at the table.

The next morning the prayers zipped by, with the men splitting the Torah reading between them. Bennett’s chief of staff, Tal Gan-Zvi, organized a kiddush for us, with cinnamon rogelach and Milano cookies.

The rest of the day was spent walking up and down the hotel stairs, eating cold cuts and cookies and reading in my room (The Grey Lady Winked by Ashley Rindsberg, very interesting).

The afternoon was sleepy and uneventful, and then everything went back to normal when the sun set and three stars appeared in the sky: We had to bring our luggage to be checked by the Shin Bet and then head to Joint Base Andrews for our red-eye flight home to Israel.

A Shabbat with the prime minister to remember. 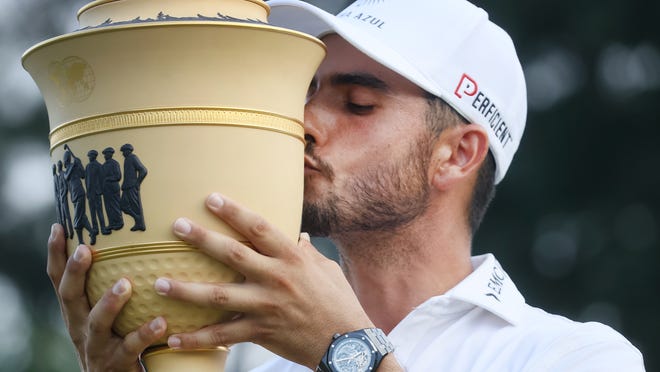 Taxi drivers, croupiers, waiters… Some professions allow the chance to have a peek at human nature from an angle that would be really hard to find elsewhere. However, while most of them deal with people in person, others get to “meet” them mostly through the leftovers of their presence. In November, Reddit user ThatSportsGameGuy made […]

I'm usually a budget traveler because, historically, I had to be if I wanted to see the world.Until recently, I...