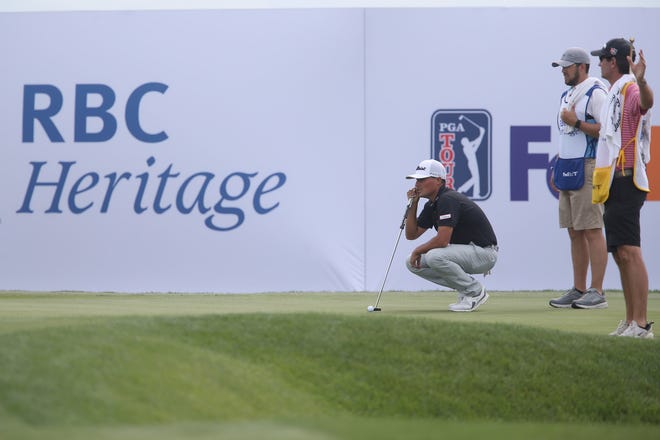 Bryson Nimmer can remember hitting golf balls in the fields at his family’s turf farm when he was growing up.

This week, Nimmer will make his third start in a PGA Tour event this year at the Palmetto Championship at Congaree — while local golf fans use one of the Nimmers’ fields for parking.

“It was wild,” Nimmer said of learning he’d be playing in the one-time tournament so close to home.

Years after he practiced his swing in the turf fields when he accompanied his father to work, Nimmer, now 24, has grown up to become a professional golfer trying to earn full status on the Korn Ferry and PGA tours.

His family lived in their hometown of Ridgeland, South Carolina, when he was younger and moved to Bluffton before he starred at Hilton Head Christian Academy and Clemson University. He now lives in Okatie and plays out of Berkeley Hall and Chechessee Creek clubs.

“The weather’s good, the golf is great and I enjoy being at home,” he said.

Nimmer earned a sponsor exemption into the RBC Canadian Open by winning the LOCALiQ Series last year, then Congaree Golf Club in Jasper County was selected to host this week’s replacement event after the Canadian Open was canceled because of COVID-19.

There was some doubt about whether he’d have to wait a year for the next Canadian Open, he said, but the tour granted him the exemption to play in the Palmetto Championship. Now he’s set to tee off in Thursday’s first round about 10 miles from Nimmer Turf Farm’s Ridgeland headquarters.

This will be the second time in two months Nimmer has gotten a chance to play in a PGA Tour event in front of a hometown crowd. In April, he competed in the RBC Heritage on another sponsor exemption.

With a gallery of more than 100 friends, family and other local supporters following his group, Nimmer missed the cut at Harbour Town Golf Links on Hilton Head Island. But he did follow up a tough opening-round 80 with a 3-under-par 68 in the second round to finish his Heritage debut on a strong note.

Nimmer said it was the biggest crowd he’d ever played in front of — and he felt a lot more comfortable after getting through the first round. He’s expecting a similar following this week.

“I think it’s going to be exactly the same, which is a good thing,” he said, adding that his second-round performance “hopefully showed I deserved to be out there and play on that level.”

“He had a real terrible day in his mind Thursday,” his father Tony said, “but came back Friday, even though there was no way to make the cut. At least he showed that crowd and the people who invited him, he kind of proved to everybody that he belonged.”

Since the Heritage, Nimmer has played in a pair of Korn Ferry Tour events in Tennessee. He said he played in the Simmons Bank Open in Nashville last month on an exemption and his top-25 finish earned a spot in the Visit Knoxville Open, where he tied for 27th and just missed an exemption to play the following week.

His most recent competition was a mini-tour event in North Carolina where he finished third. Last week, Nimmer said, he was at home practicing and getting ready for the Palmetto Championship. He said he’d played at Congaree about two weeks earlier, his third round at the private club that opened in 2017 on a former rice plantation and hunting preserve near Gillisonville.

‘This is going to be huge’:Palmetto Championship at Congaree set for June

“I think I have a pretty good feel for it,” he said. “It’s a really special place.”

Tony, who also played golf at Clemson, said he has played at Congaree a few times and thinks it will be one of the toughest courses players will see on tour this season.

“It’s very challenging,” he said. “It’s a very long course, but the biggest thing about Congaree is the firmness of the greens and a lot of the contours of the greens.”

Bryson said he remembers starting to pick up golf with his dad at Sergeant Jasper Golf Club, which is about a 20-minute drive from Congaree. His grandfather Freddie helped found the nine-hole course, where he played a weekly blitz with some friends.

When Bryson was about 10-12 years old, he would play in the blitz and then go out and play some more golf while Freddie and his friends talked, he said.

Since then, “The Sarge” has been acquired by Congaree Foundation to provide low-cost golf to the public and programs for Jasper County youth. Tournament officials have said some of the Palmetto Championship’s proceeds will go toward the foundation’s programs — including renovations at the nine-hole course where one of this week’s competitors learned the game.

“The only golf course we really had was The Sarge — and it’s not exactly Congaree,” Nimmer said. “But I wouldn’t be where I am now without that.”

Shellie Murdaugh contributed to this report.