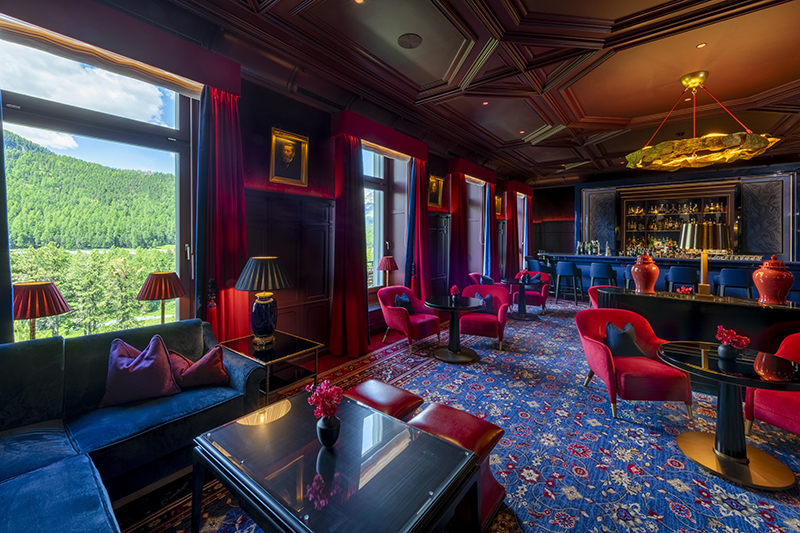 Grand Hotel Kronenhof, located just outside St. Moritz in Switzerland, recently unveiled a major renovation to its public spaces as part of the property’s longstanding partnership with French interior designer Pierre-Yves Rochon (who has previously worked on the Four Seasons Hotel George V, Paris, The Savoy in London, the Waldorf Astoria Beverly Hills and sister property Kulm Hotel St. Moritz). Subtle changes have been made to bring the Neo-Baroque Grand Dame into the 21st century, while maintaining key historic elements.

Upon arriving at Grand Hotel Kronenhof, guests will enter an updated reception area that has new sliding doors etched in white and rose gold, creating a semi-transparent snowflake effect. Good to know: The historic center table and iconic chandelier are still present in the lobby. To ensure a residential feel, shades of blue and modern furnishings have been integrated throughout.

In addition, the Kronenhof Bar has been completely redesigned and is now home to the art piece by Charles Paris Chez Rubelli—a gold chandelier that resembles the historic Kronenhof crown, titled “Luster Angela.” Other artworks inspired by the Swiss stone pine roots and custom-designed by artist Jane Puylagarde can be found on the varnish panels of the bar counter. Beyond the new art, “deep colors, rich materials and golden accents” are exhibited throughout the space. 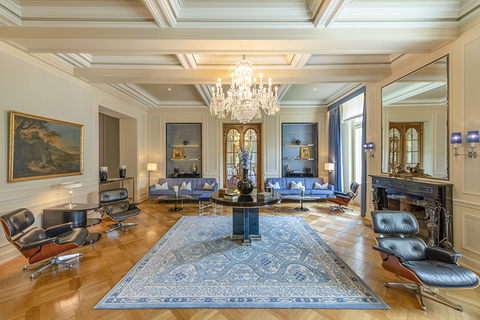 The renovation of the Chimney Room has made the area much more residential. The original black chimney and Eames chairs remain, while new sleek features were added, including Florence Knoll sofas, a glass chandelier and modern bookshelves.

Grand Hotel Kronenhof first opened its doors in the first half of the 19th century as a guesthouse; however, the main part of the current building—which is a registered historical landmark—was built at the very end of the 19th century in Neo-Baroque style. The latest wing, completed in November 2007 and costing approximately $33 million, consists of 28 guestrooms and a spa complex covering more than 21,500 square feet. More recently, Pierre-Yves Rochon has been renovating a few guestrooms per year, while the hotel has also added a cigar lounge and adjoining billiards room.

Destination Report: The Tastes of Zurich