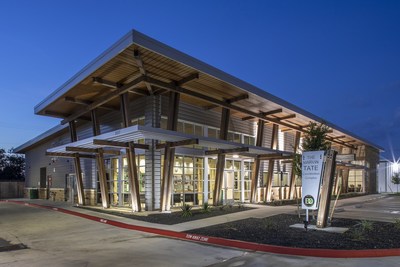 Located at 2117 Nuches Lane, the 1070 m2 (11,518 sf) centre was designed by Williamson Group Architects and PlanNorth Architectural Company. It features integrated technology and is 100 percent compliant with the Americans with Disabilities Act (ADA).

The building will serve as the new headquarters for mass transportation provider Brazos Transit District (BTD). It will include offices, meeting spaces, an adaptable boardroom with built-in accessibility features, and lobby space highlighting BTD’s history. The exterior façade consists of modern metal paneling and glued laminated (glulam) timber beams, which are durable and efficient to produce.