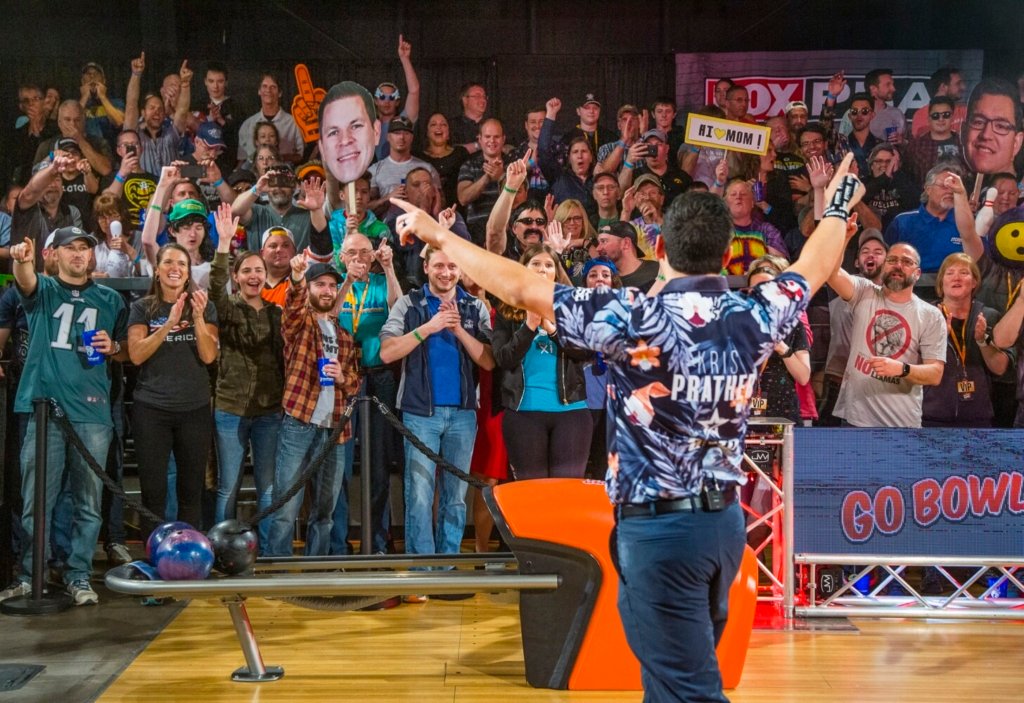 Fans at Bayside Bowl cheer for Kris Prather during the 2019 PBA League Elias Cup in Portland. Prather will be back at Bayside Bowl this week to defend his title in the “King of the Lanes” televised event. Carl D. Walsh/Staff Photographer

Some of the world’s top bowlers will compete at three Professional Bowlers Association events this week at Bayside Bowl. The Portland crowd, well-known in the bowling world for its raucous energy, will be the first to attend a PBA event since the pandemic forced the tour behind closed doors last year.

Eleven women will battle for the title of “Empress of the Lanes” in a series of one-on-one matchups on Tuesday and Wednesday night. The men will use the same format on Saturday and Sunday afternoons to crown the “King of the Lanes,” after bowlers compete in a “Strike Derby” on Friday.

After a year without crowds, the bowlers are excited to be back in front of “the best fans in the country,” said PBA Tour Commissioner Tom Clark.

“It’s so appropriate that the first time we can have fans back watching pro bowling is at Bayside Bowl,” Clark said.

The Bayside crowd is known for donning costumes and chanting – behavior that stands out in a sport typically associated with polite clapping from fans.

“At Bayside Bowl, they never stop cheering,” said Clark, who first brought the PBA Tour to Portland in 2015. “The players love it.“

The team-based PBA League Elias Cup was scheduled to return to Portland in 2020 until the pandemic hit. While the PBA was able to hold the rest of its season, including the Elias Cup, in a bubble in Florida, Bayside Bowl struggled to find business, said owner Charlie Mitchell.

“There were certainly some bleak days throughout the winter,” said Mitchell, who estimated that Bayside Bowl lost 18 weddings and 150-180 corporate parties because of the pandemic. “The only thing that really kept us going throughout this whole stretch was the league bowlers.”

“The business is definitely going to survive,” Mitchell said. “This is going to be a really special PBA event for the league, because we kind of got through this together, and now we get to celebrate.” 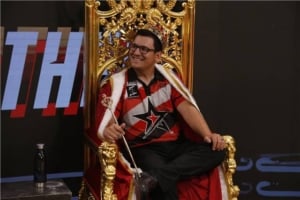 Kris Prather sits on his throne after winning the 2020 King of the Lanes event. He’ll attempt to defend his title this weekend. Courtesy of PBA Tour

Bayside Bowl will host a reduced-size crowd of between 200 and 300. Single-day tickets to the women’s events on Tuesday and Wednesday are still available for $25 each, and week passes granting admission to all five events are on sale for $75.

“King of the Lanes” will air live on Fox Sports 1. Two contenders will battle each other head-to-head, with the winner facing off against the reigning “King” or “Empress” for the crown.

Props like a throne and crown will make the event a perfect fit for the Bayside crowd, said Clark.

“We’re dressing the game up; there’s a little bit of fun involved,” said Clark. “But you have to win it with legit bowling on the lanes against the best players in the world.”

Though Portland fans have already met and befriended many of the elite male players on tour, according to Mitchell, “King of the Lanes: Empress Edition” will be their first chance to see women compete against each other.

“All of our leagues are coed; that’s just sort of the ethos of Bayside Bowl,” said Mitchell. “Our fans are certainly excited about (the event), because we haven’t had the opportunity to see a lot of the professional women.”

Kelly Kulick, who in 2010 became the first woman to win an event on the PBA Tour, will start Tuesday night as the “Empress of the Lanes”. Liz Johnson, the only other woman to win a PBA Tour event, will compete on Wednesday.

“Those are just two of the all-time legends of the game that any bowling fan would want to see compete,” Clark said. “For us to be able to put top women on national television in this format is a great chance to show everybody, or remind everyone, that there are incredible women’s professional bowlers and they’re really fun to watch.”

Reining “King of the Lanes ” Kris Prather, who has won back-to-back Elias Cup championships with the hometown Portland Lumberjacks, will be a fan favorite on the men’s side, said Clark. But he added that the crowd could favor Tim Mack, who manages the Lumberjacks but doesn’t regularly compete on tour.

“I really feel like that match and the crowd support for Tim Mack will be like something we’ve never seen in bowling before,” said Clark. “It’ll be wild.” 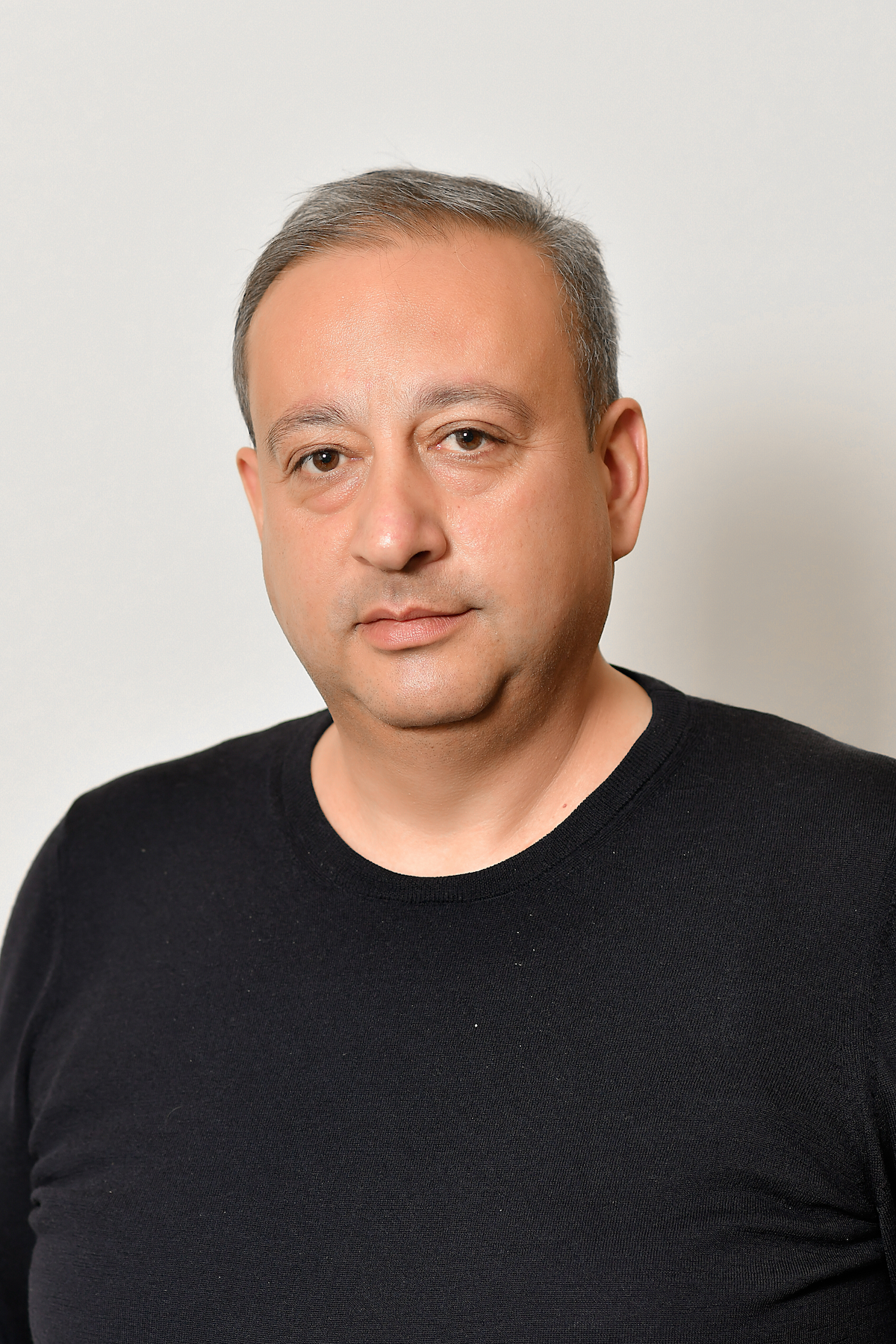