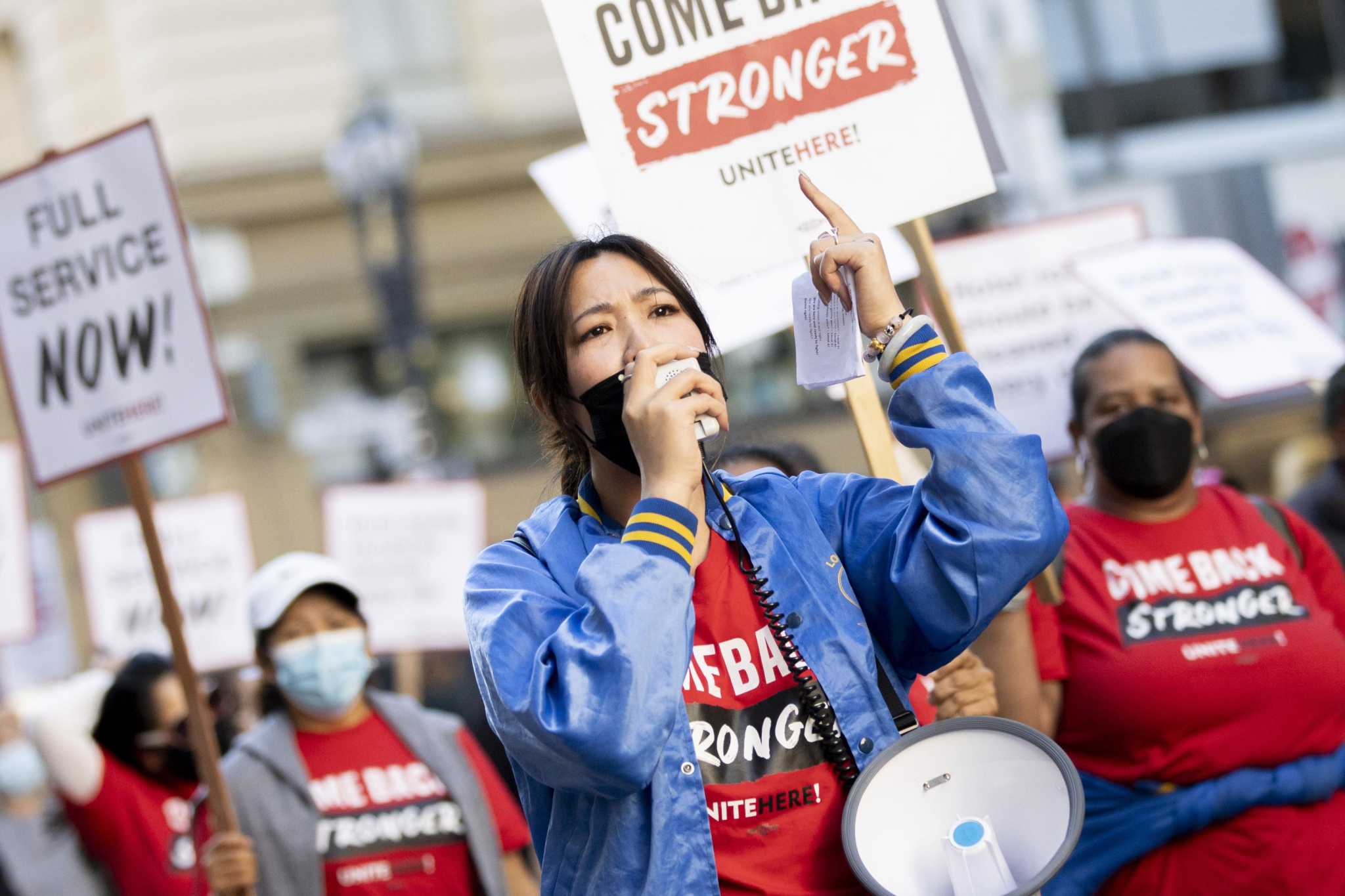 Before the pandemic, Claudia Valencia worked at the Hilton San Francisco Union Square hotel as a housekeeper, cleaning rooms five days a week. She liked the work, which paid close to $30 an hour and gave her access to affordable medical care for herself and her family.

When she was laid off last year because of the pandemic she figured it might be for a few months. But a year and a half later, she hasn’t been able to return to her old job even close to full time, only picking up one shift since the hotel, the largest west of Las Vegas, checked in its first guests since last year in May.

On Thursday, hundreds of members of Valencia’s union, Unite Here Local 2, marched in downtown San Francisco and cities across the country to demand a return to pre-pandemic levels of work.

San Francisco Supervisor Matt Haney posted pictures on Twitter of himself with the union workers, and calling out city hotels for cutting back on automatic housekeeping, which he said could lead to a loss of more than 180,000 jobs and over $4 billion in wages lost each year.

In an emailed statement, a spokesperson for Hilton did not directly address questions about what percentage of staff had been hired back or when the hotel plans to return to previous staffing levels.

“Staffing levels are informed by market demand, local business environments, as well as recommendations from government and health authorities,” the hotel said, adding “We look forward to welcoming back our guests and team members.”

The city’s hotel occupancy has rebounded somewhat from its dismal levels this time last year, but is still only about half of the close to 90% of rooms that were filled in October 2019, according to data from S.F. Travel, the city’s visitors bureau.

Occupancy rates peaked at around 47% in San Francisco over the summer, and currently sit at around 45%.

But union hotel workers and officials said it isn’t depressed occupancy rates that are stopping their members from coming back to work, but a bid by hotels to cut costs and squeeze more productivity out of fewer employees.

“Hotel companies are taking advantage of the pandemic to try to cut jobs through increased workloads and automation,” said Unite Here Local 2 President Anand Singh in an emailed statement.

Singh said at the Hilton Union Square, occupancy was projected at 75% for the last Saturday in October but that only about 40% percent of housekeepers were scheduled to work that day. “Citywide, only around 30% to 35% of our members are back at work,” he said.

San Francisco has passed legislation that requires some businesses to rehire people laid off during the pandemic based on seniority, but similar statewide efforts have not gotten past the governor’s desk.

Statewide, the leisure and hospitality industry led the charge earlier this year in bringing jobs back, but that has leveled off, according to the latest numbers. Hiring seems to have stalled somewhat as the statewide unemployment rate has remained stuck at 7.5% for the past two months, only coming down by fractions of a percentage point since the summer.

Across California the industry added about 23,000 jobs from August to September, about half the increase between July and August.

Overall job postings are also lagging in California compared with pre-pandemic benchmarks, according to Michael Bernick, an attorney with the law firm Duane Morris and a former director of the state’s Employment Development Department.

Bernick said for the week ending in Oct. 22, job postings nationwide were 16.8% above January 2020 compared with 0.8% in California, a sign of a sputtering statewide economic engine.

For Valencia, the laid-off housekeeper, that has meant fewer options for good work to replace her missing union wages. Her husband also worked in facilities at the hotel and was laid off. He’s found work as a painter, but the money isn’t enough.

Valencia said she’s started working part time for Walmart near her home in the East Bay, but the $17 per hour isn’t sufficient, and she’s had to go on MediCal for her health benefits for herself and her family.