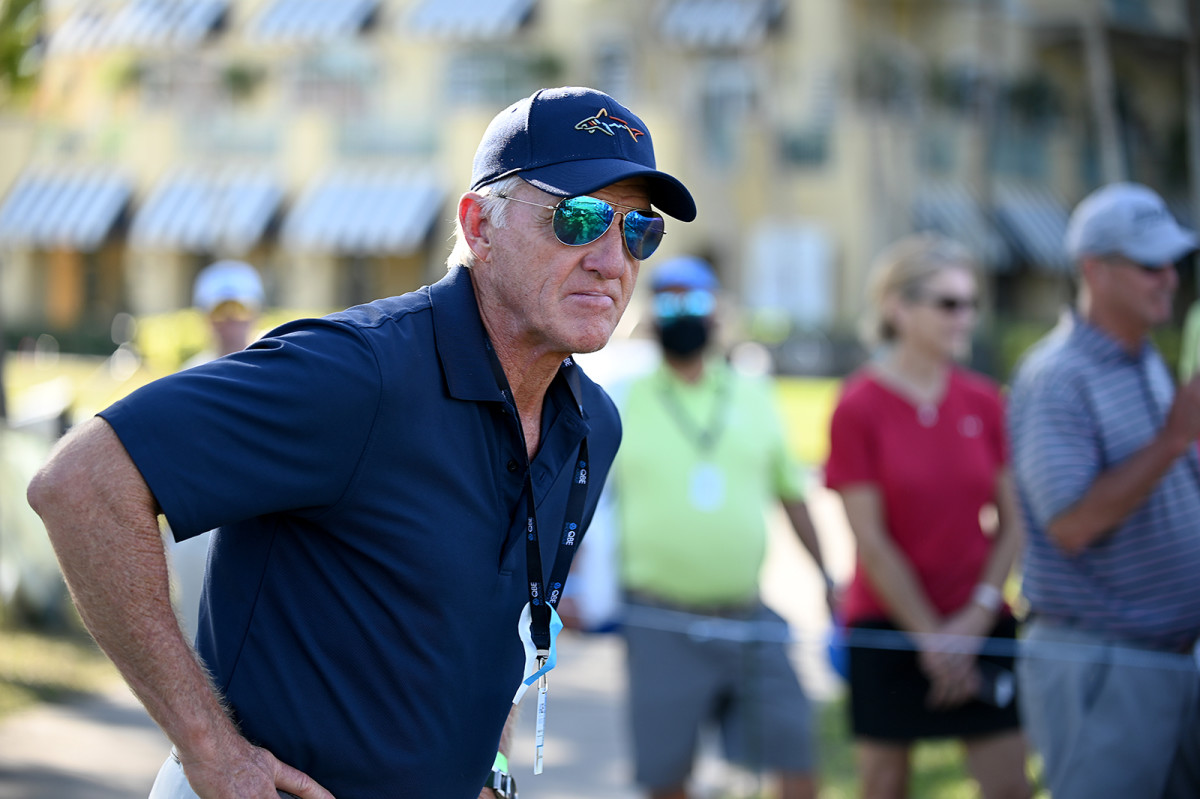 Greg Norman is pushing ahead with his rival golf league, announcing Wednesday the launch with an eight-tournament schedule that will begin in June and offer $25 million purses per event.

The league will be called the LIV Golf Invitational Series.

The concept that has been floating around for months and caused considerable disruption on the PGA Tour will see 54-hole events with no cuts, shotgun starts and purses that will pay $20 million for the individual portion, $5 million for the team portion, and a season-ending event that will have a $30 million purse.

In all, LIV Golf Investments, of which Norman is the CEO, is committing $400 million to launch the league with $250 million in prize money.

Still to be determined is who will participate.

Norman, who is commissioner of the LIV Golf Invitational Series, said letters went to more than 250 players around the world on Tuesday inviting them to play in the tournaments but not requiring them to compete in all of them.

“Will they all come in the beginning? Heck no,” Norman said in an interview. “We understand that. But they have to determine for themselves as independent contractors that they can play both and do both. This is 100 percent additive. There is nothing wrong with playing both tours. I encourage them to do that.’’

The PGA Tour and commissioner Jay Monahan have pushed back, threatening to ban players who participate or prohibit them from competing in PGA Tour events if they are part of the new league.

The question that now has no answer is what happens if a player simply wants to compete in a few of the LIV Golf Invitational Series events?

Among those who were heavily involved in the new venture was Phil Mickelson, who was highly critical of the PGA Tour in a Golf Digest interview, referring to the organization’s “obnoxious greed’’ as a reason for exploring the alternatives. In another interview that was published in the Fire Pit Collective, Mickelson disclosed that he was using the concept for leverage with the PGA Tour, was involved in helping the new league draft its business proposal and then called out the Saudi Arabian government – whose sovereign wealth fund is behind LIV Golf Investments – for its human rights issues.

Mickelson, 51, has dealt with considerable blowback in the aftermath, losing several sponsors and announcing a leave from the game three weeks ago. Norman said he has not spoken to Mickelson, whose return to competitive golf has not been announced. The Masters is in three weeks.

“From player to player, that’s how I’ll answer this: Phil will be back,’’ Norman said. “He’s been great for the game of golf. He’s got a fan base that is incredible. He’s done things that other players wish they could emulate. I wish him nothing but success.

“We all make mistakes. We all screw up and say stupid things we didn’t want to say. As soon as he gets things sorted out, we will welcome him whenever he wants to come back.’’

If Mickelson or any player chooses to participate, their first opportunity with be June 9-11 at the Centurion Club in London. That is the week prior to the U.S. Open. The schedule includes four U.S-based events, plus one in Thailand, another in Saudi Arabia and a to-be-determined site for the league’s Team Championship Oct. 28-30.

One of the U.S. sites is Trump International Golf Club in Bedminster, New Jersey. The club was originally awarded this year’s PGA Championship, but was moved to Southern Hills in Tulsa, Oklahoma, in the aftermath of the Jan. 6, 2021 violence in Washington, D.C. when Donald Trump was U.S. president. That tournament is scheduled for July 29-31.

The league has yet to announce a television partner.

“We’ve been in the marketplace for the past three or four months talking to entities around the globe about our concept, our vision, and what we plan to do around the game of golf,’’ said Sean Bratches, a former F1 and ESPN executive. “The reception has been pretty favorable and the dialogue is fluid. We need to now go back and re-engage with exactly what our plans are which we believe is unique.

“We plan to engage as never seen before as it relates to the landscape of golf. There are obstacles, clearly. We’re optimistic that we are going to have production that is second to none.’’

As has been previously discussed, the plan is to have 48-player fields. There will be shotgun starts over the first two rounds with standard tee times for the final day. Each field will also consist of 12 four-man teams who will compete for a separate $5 million purse, with the top three teams sharing in prize money.

Because players will not be required to play in all of the events, Norman said there will likely some sort of draft prior to each tournament to determine teams. He would not discuss whether players will be compensated up front for their participation, as that was a subject of considerable interest as the likes of Mickelson, Bryson DeChambeau and Dustin Johnson, among several others, were pursued.

Much of that stopped last month at the Genesis Invitational where Mickelson’s comments were disclosed and several PGA Tour players announced their loyalty to the PGA Tour. Among them have been Rory McIlroy, Brooks Koepka, Collin Morikawa, Jon Rahm and several others.

“We had to react,’’ Norman said. “No question the PGA Tour’s reaction to where we were positioned at that time was very strong. They put down a tree in their road to put another obstacle in our way. But no matter what obstacle they put forth we work our way around it. And that’s why we are here today. It’s up to the players.

“We are going to give them opportunities to play where they want to play and choose. We are not going away. We are here for the long haul.’’

Norman, 66, a two-time major winner and member of the World Golf Hall of Fame, attempted to start a World Golf Tour in 1993-94 when he was at the height of his playing career.

The Australian has long believed that the independent contractor status of players should allow them to compete where they want, when they want, without constraints.

The PGA Tour’s rules state a member must play in a minimum of 15 events per year and seek releases to compete in “conflicting’’ tournaments. Those releases are essentially permission to play outside of the PGA Tour. Generally three such releases are allowed before concessions are required to go beyond that.

“Our PGA Tour rules and regulations were written by the players, for the players,’’ Monahan said last week at the Players Championship. “They’ve been in existence for over 50 years. I’m confident in our rules and regulations, my ability to administer them, and that’s my position on the matter. I can’t say it any more clearly. We’re confident in our position and we’re going to keep moving forward as a PGA Tour and focus on the things that we can control.’’

The LIV Golf Invitational 2022 schedule will visit the following dates and locations: