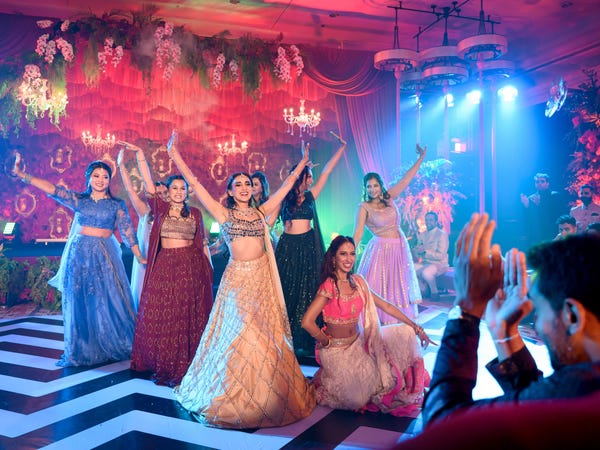 The big, fat, Indian wedding is the stuff of dreams.

For Krishma Sood Bhojwani, this meant hosting a four-day-long celebration at the JW Marriott in Phuket, Thailand. The bride imported cheese wheels from Italy, sourced Iberico ham directly from Spain, and hired a photography team from Mumbai. She flew in chefs from India and Japan, and had cooks preparing fresh food across 24 dining stations.

The wedding consisted of eight events spread across four days, all set against the backdrop of the oceanfront resort where lush jungle meets the province’s coastline. The 120 guests, who flew in from around the world and wore black-tie attire and intricately embroidered lehengas, were treated to cocktail dinners by the beach and ballroom parties.

Bhojwani had arranged for a floating altar and wore traditional outfits that were made by luxury designers like Sabyasachi, whose designs can go for $30,000 a piece.

As for the cost? Around $400,000 for the wedding events alone, Bhojwani estimates — and that doesn’t account for the couple’s jewelry and outfits.

“I did have a strict budget — money doesn’t grow on a tree. We were sharp on cost and didn’t spend a dollar over what I said we would,” Bhojwani, who’s from Australia, told Insider.

In India, the wedding industry is worth a whopping $50 billion, and it’s not uncommon for wealthy families to spend astronomical amounts of money on weddings. In 2018, billionaire tycoon Mukesh Ambani spent a reported $100 million on his daughter’s wedding, with guests like Beyonce, Shah Rukh Khan, and Hillary Clinton in attendance.

But even for the just ordinarily wealthy, weddings can ring up serious price tags: Indian families are known to spend as much as $800,000 on destination weddings at five-star hotels and resorts across Southeast Asia. Traditionally, the bride’s family would bear the wedding costs, but that’s now considered an outdated practice — many families, including Bhojwani and her husband’s, choose to share the expenses. As Bhojwani put it, Indian couples typically have a “huge amount of parental support” in financing the costs of their wedding.

Now, as luxury resorts across Southeast Asia emerge from the pandemic, many of them are competing for these lucrative Indian weddings. Many of these establishments are still reeling from the financial impact of the pandemic, and they’re sparing no effort to attract the business of wealthy Indian couples to make up for the deficits. After all, that big Indian wedding may just be the tipping factor between ending the year in red or black.

One reason high-end Indian weddings can be so expensive is because they’re often not single-day events — Sikh wedding ceremonies, for example, are held over several days, said Vin Ramash, a wedding planner with Singapore-based wedding and events company Alangkaar.

“At the higher end, Punjabi weddings start at $100,000 per day, so spending $500,000 is possible,” Ramash told Insider, explaining that this is typical of weddings held at premium hotels like Capella, St. Regis, or Ritz-Carlton.

But the bells, whistles, and whims of the couple also contribute to the hefty price tag.

Hand-made mandaps, or altars, and custom-designed decorations can cost around $40,000, Ramash said — and additional requests like fireworks can cost even more.

And then there’s the travel element.

As destination weddings become more popular among high-net worth Indian couples, many couples are looking to Thailand. Ramash said Alangkaar’s tourism partner in the country anticipates 400 to 500 “large-sale Indian weddings” in 2023 alone.

“Couples love destination weddings in Thailand because of the value you get for every dollar you spend. People want an experience — it’s not just about status,” Ramash, who plans weddings in Singapore, Bali, and Phuket, added.

Vendors and planners in Phu Quoc failed to understand what they wanted for their wedding “no matter how hard we negotiated,” Bhojwani said. The planners and venue in Thailand, meanwhile, “understood the vision, the scale, the grandeur, and experience” she and her husband were looking for.

Tourism boards and luxury hotels are fighting for weddings

Given the pent-up demand, and in an effort to get back to pre-pandemic business levels, tourism boards and luxury hotels are prioritizing marketing campaigns that target the ultra-luxe destination Indian wedding segment. That means that destinations like Thailand, Indonesia, Vietnam, and the Maldives are often vying for the same big-budget weddings.

Resorts are leaving no stone unturned in their efforts to become the destination of choice. Hotels are catering to all sorts of demands from the wedding parties, including making special arrangements for religious rituals like providing a Hindu priest to solemnize the wedding. In some instances, they’ve even offered to rebook guests at sister venues if a bigger wedding party wants to book out the entire property.

Tourism boards are getting in on it, too.

For Thailand, wedding revenue is embedded into the tourism revenue for the year. Thailand expects a 600 billion to 700 billion baht, or $16 to 19 million, boost to tourism revenues this year from luxury weddings and honeymooners, Reuters reported, citing a senior tourism official. Indian tourists are the “priority” this year, Tanes Petsuwan, the deputy governor of Thailand’s tourism authority, told Nikkei Asia.

Other tourism boards, like Indonesia’s, are also on the prowl to woo these glitzy-eyed couples. These exclusive weddings can cost anywhere from $200,000 to $500,000, Sanjay Sondhi, the CEO of Om Tourism and the head of Indonesia’s tourism board for India, told Insider.

Indonesia tourism board officials often collaborate with the biggest wedding planners in countries like India, and in some instances are even present when resorts are pitching to the prospective brides and grooms.

The fruits of this labor can be sweet. For one high-profile wedding slated to be held in the tropical island of Bali, talks are now revolving around a chartered flight for around 250 guests, Sondhi said. The couple was previously mulling a destination wedding in Thailand.

Hotels lay out the red carpet

With the main Indian wedding season, which runs from October to December, just around the corner, hotels are seeing a pick-up in inquiries.

Demand for Six Senses properties across Southeast Asia for Indian destination weddings has been on the rise, with Six Senses Uluwatu in Bali being the absolute “favorite,” Agnes Poon, the director of sales and marketing for Six Senses in Asia, told Insider. In August, the five-star resort held the wedding for a high-end family based in South India, Poon said. And in late 2021, the hotel chain hosted the wedding of Bollywood stars Katrina Kaif and Vicky Kaushal. The wedding took place at the chain’s flagship property in India, Six Senses Fort Barwara.

Poon said queries are coming in for minimums of 200-250 rooms at the resort, which rests on the famed limestone cliffs of Uluwatu and opens up to sweeping views of the Indian Ocean.

To be sure, it’s not just Indian weddings that are big business. The global wedding services industry generated $160.5 billion revenues in 2020 and is expected to generate revenues of $414.2 billion in 2030, per an Allied Market Research report.

Luxury hotel Capella Singapore has weddings scheduled for every weekend of the year, Victoria Lim, a content marketing specialist at Capella Hotel group, told Insider. Demand for venues is topping pre-pandemic levels — but the type of demand is also diversifying. Capella is seeing an increase in small and intimate solemnization, especially for couples who put their weddings on pause due to the pandemic, Lim said.

But for many of those taking the traditional big Indian wedding route, it’s worth it to dish out — even if they had to change their plans multiple times along the way.

“I’ve always dreamed of having a beautiful wedding,” Bhojwani said of her April wedding. “It was really hard, it was delayed for three years but we got there in the end. It’s definitely worth it.”