A LARGE silver swan, wings stretched high and wide, dominates the side of the brilliant, white side wall of a village pub.

The sign on the wall of The Swan, a 170-year-old inn in the small North Lanarkshire village of Banton, has more than a passing look of a phoenix – apt for an establishment once doomed but now, risen from the ashes, the beating heart of the village it is now credited with transforming.

“The silver swan with its wings raised, illuminated at night… it’s a symbol of the village,” says Catherine Moneypenny of People United for Banton (PUB), the community group that stepped in to take over the pub as it tottered towards its very final ‘last orders’.

“It says when you come to Banton, you’re coming to a place that has risen again, like a phoenix.”

Today Banton is a lively village with new shops and thriving businesses. At its centre, The Swan provides a hub for a range of social events spanning all age groups, while a powerful community spirit has sparked fundraising campaigns for a new playground, defibrillator and first aid classes.

Yet just a few years ago, Banton was the kind of small North Lanarkshire village that most might who strayed off the nearby M80 in search of a shop, welcoming pub or warming cuppa, would just have kept driving right on through.

The village shop had closed, along with the post office. Locals faced a 90-minute round bus trip for their weekly shop, and even that was threatened with cuts.

Banton, close to Kilsyth and once a bustling industrial hub with a busy mill, brickworks that stamped its bricks with the village name, and a clutch of nearby coalmines, was almost on its knees.

Buying the pub, says Catherine, changed all of that.

This week The Swan, the nation’s first community-owned pub, open for business since last August and already on course to make a profit, was toasting its latest success as winner of a Scottish Civic Trust award in recognition of the remarkable transformation it has brought to tiny Banton.

The My Place Sustainability Award praised the community’s efforts in “renovating and reinvigorating a local historic landmark” once earmarked for demolition.

The Trust applauded villagers’ efforts to safeguard cultural and built heritage, creating jobs and local training opportunities and developing “community capacity and resilience to respond to our changing climate.”

For villagers, however, the reborn local hostelry bought thanks to £180,000 from the Scottish Land Fund and a massive community effort, is the vital spark that has dragged Banton from the doldrums to become a vibrant village they’re proud to call ‘home’.

A mark of just how far the village has come was the recent arrival of a dozen COP delegates to stay in local holiday accommodation – confirmation that Banton is now firmly on the map.

No-one could be more stunned by the success of their decision to buy a pub, than them.

“We have 12 COP delegates staying in the area,” she says. “It’s a little bit of a dream. We’re thinking ‘Really? In Banton?

“But The Swan has been transformative, it has galvanised the community, and created a sense that anything is possible.”

The Swan, once an oasis in a temperance heartland which drew busloads of miners from nearby ‘dry’ communities with no pub of their own, served its community for generations as a focal point for village life.

By 2016, dilapidated and struggling to survive, proposals emerged for it to be demolished. Within 48 hours People United for Banton (P.U.B.) had formed.

“It was a worrying time for the village, we lost our oldest shop in the village, the post office, the bus service was threatened with closure and there was a feeling that the village was in trouble,” adds Catherine.

“We could not afford to lose anything else.

“The pub was still used but it was in a state of disrepair. Bits were crumbling.

“It wasn’t just about painting it, it needed significant work and it would not have been viable to run it as a private business and do that level of investment.

“It turned out it was one of those watershed moments. Panic turned to thoughts of how to resolve it.”

A village consultation showed massive support to take over The Swan create a community hub. Within 15 months £180,000 was on the table from the Scottish Land Fund.

The community set about raising the remainder of the purchase costs – around £10,000 was achieved from a village of just 500 residents.

But while the community had funds to buy the pub, its renovation costs were eye-watering, sparking fears the dream might be doomed.

“It was our wobbly moment,” recalls Catherine. “All the quotes for the renovation were at least £400,000 higher than the amount we had.”

Funds came from a series of grants, including one from the Clothworkers’ Foundation, a throwback to Banton’s heritage as a centre for weaving and linen production.

The community received The Swan’s keys last spring – just in time for the hospitality sector to be crippled by lockdown restrictions. Undaunted, locals used the pub as a base to distribute care packs for residents and activity kits for children.

But The Swan’s takeover had already spilled over to other areas of village life.

“The confidence has come back to the community, and once there is hope and confidence, other things happen,” says Catherine.

“There was this feeling of possibility. One group began fundraising for a defibrillator and ran first aid courses, another fundraised for a playpark in the village.”

The ‘Wee Hub’, a space set aside within The Swan for community sue, has seen exhibitions, social gatherings, and events like a popup book shop and makers’ market, while outside, the community spirit began to attract others.

The unoccupied former Barnton Mill was rejuvenated as the headquarters for Caulders Garden Centres. The village shop reopened, a new art gallery popped up, followed by other shops selling locally made crafts. And on the village fringes, new accommodation for tourists opened.

“These new businesses have been very much inspired by the community creativity behind The Swan. All these spaces are at village cross, it has turned Banton into a ‘destination’,” adds Catherine.

The Swan has also become a shining example for other communities facing the loss of their village pub. From Britain’s most remote hostelry, the Old Forge Inn on the Knoydart Peninsula to the 400-year-old Crook Inn in Tweedsmuir, communities are in the process of becoming their own pub landlords.

“None of us had done anything comparable to this previously, and this was the first community owned pub in Scotland, so there was no precedent for this.

“The wonderful part of the process is seeing we are having an impact, not just in Banton but on other communities.”

“The Swan is not just a pub,” adds Catherine, “it’s the heart of the community.” 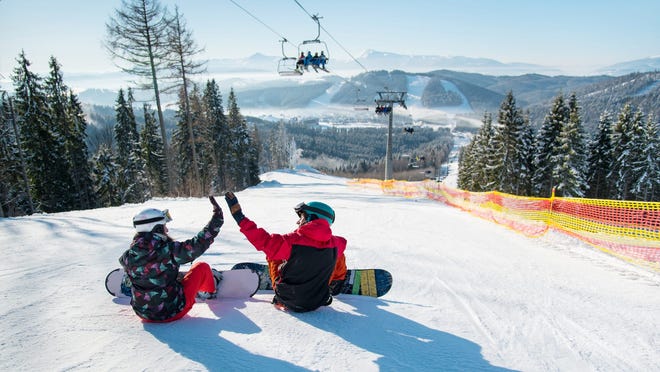