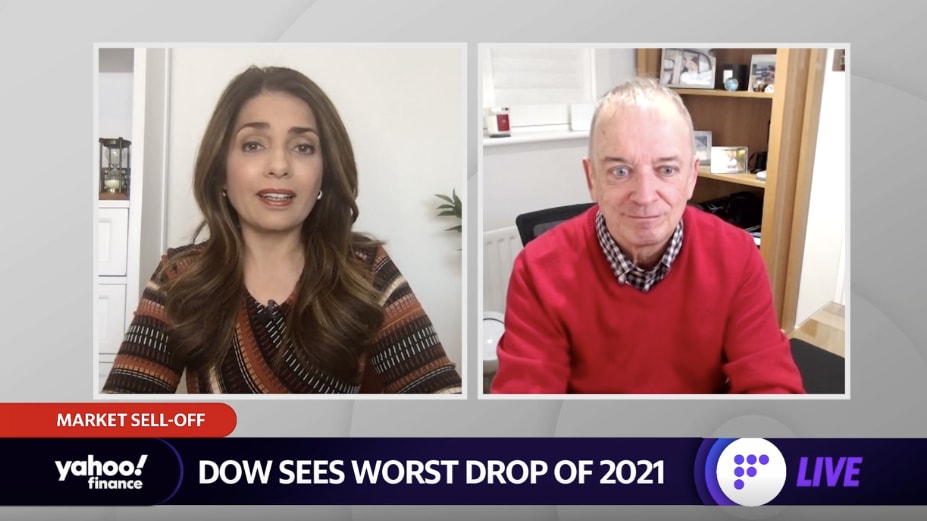 – Welcome back to Yahoo Finance. Well, we are seeing a new COVID variant, fears over it rocking Wall Street at the moment. The Dow is off by 967 points off session lows. It was down by over 1,000 points just a short time ago. But still a sea of red, the S&P and NASDAQ also tumbling. And want to take a look at oil prices also slumping with WTI oil seeing its biggest drop now since April doing what a coalition of countries could not do by– by saying they would release Strategic Petroleum reserves bringing that price down. And then airline stocks are tumbling on the news overnight as countries begin curbing air travel.

Joining us to discuss it all is senior aviation analyst for tracking service, OAG, John Grant. Thank you so much for being here. Are you surprised by how quickly the travel industry has been decimated literally overnight with stocks, you know, coming down so much just on fears? We don’t even know the reality of the situation yet.

JOHN GRANT: No, it looks an overreaction. When you actually crunch the numbers and you look at what’s happened in terms of capacity, southern Africa as a region is less than half of 1% of the world’s total flying. 80% of that occurs purely within South Africa. Yes, there are international flights out, but for those international airlines, South Africa is a very small part of their networks. It seems to me like we’re seeing in many parts of the world and knee-jerk reaction to something that has to be expected. This is going to happen as the aviation industry comes out of the COVID crisis. It will not be a straight line to the new normal.

– John, I suppose– the investor concern is there’s going to be going to be a bit of a knock-on effect, a domino effect, if you will. You’ve got a case or two in Hong Kong, you know, there’s fears that that could lead to another border closure. You have another case in Belgium. I mean, the reality is that just based on what we’ve learned over the last 24 hours, this is not a variant that is contained to the African continent. So I wonder how you look at that and how quickly countries have moved– you know, what does that tell you about how likely they are to impose even stricter restrictions at a time when over in Europe, there are fears of this wave expanding?

JOHN GRANT: Well, I think– I think, you know, we’ve got to get this in context. Firstly, we’re in a much better position in terms of testing, tracing, and tracking. And for that part of the population that is prepared to be double vaccinated, clearly, that puts them in a better position. Although of course, we don’t know exactly what this new variant will be and how it behaves.

But if you take the case of Hong Kong, those two people who have been affected were caught up in a three-week quarantine process. So they were identified. They were not transmittable in terms of passing on the variant to anywhere else.

And in most of Europe, you know, it’s a requirement for a test once you’re back home. Quarantine is going to be imposed in many countries now for seven or 14 days. So I think we’re in a better place in terms of taking the steps necessary to control this and to move forward. But to see 15% of the value wiped off airline stocks, you know, it strikes me that this is– this is just a Friday afternoon overreaction in many parts of the world. Airlines’ cash reserves have been built up, they’ve been prepared for these types of events. Seems it is just– you know, seems that we need to get a bit more perspective about this in the next few days.

– And then how immediately does this impact airlines, right? Because they’re just sort of, as you say, trying to claw back from being hurt so badly because of the pandemic. They have so much debt that they need to clear off, and then now these– you know, these restrictions sort of imposed. And a place like China, you know, Hong Kong, they have such strict quarantine rules in effect. You have to quarantine for three days, you pay for it yourself. It’s– it’s sort of draconian in a way. And it seems to me like China is in no hurry to open up anytime soon either, right, with the Beijing Olympics approaching as well?

JOHN GRANT: No. I mean, China is– China quite frankly, is sitting it out, and looks like they’d be prepared to sit this out for another year. Their zero COVID policy is exactly that– draconian, it’s very impactful, they hit hard very quickly within the country. But there’s $20 billion of revenue that airlines would be earning in a normal year to and from China that is not going to occur. And that’s going to impact South East Asian airlines dramatically. And that’s before we see any– any impact from this variant.

I think for many airlines, you know, the biggest problem is– is not so much about this variant, which is still unknown, but it is about the return of the corporate demand, which we were hoping to see in the first quarter of next year. And hopefully, we still will see occur. You know, we’ve got to find out more about what this variant means and how it’s going to impact people. There seems to have been a softening of message in Europe this afternoon, where people are saying, let’s not overreact, let’s– you know, let’s be cautious, which we are. But let’s not take those hard steps too quickly.

And of course, the danger we’ve seen in the past is once we put a step in place, removing it is extremely difficult. Just look at the United States and how many days it took before international travel was allowed back over the Atlantic. It was nearly two years before the rules were eased and that restarted just recently.

– Yeah, John, you read my mind. You know, I was just thinking that before the news broke overnight, really, the story just a few days ago was about the pickup in that recovery we’re seeing for at least leisurely travel, not just here in the US because of the Thanksgiving holiday, but I’ve noticed in the last week or so just a pickup in European travelers coming into New York, for example. To what extent have you seen that accelerate? I know it’s only just been a few weeks, but how– how big has that been for some of these airlines?

JOHN GRANT: Extremely strong. And indeed, some of their business class products, their front-end products are being filled up with people who’ve got a desire to revenge spend and are traveling with a bit more luxury and a bit more social distancing. There was a lot of pent-up demand, and it is traveling now. And we’ve seen in markets around the world, when they reopen, we see a sudden– just a sudden swarm of traffic for perhaps a five or six-week period. And then we return to the normal demand profiles.

So I’m not surprised. I think Europeans would like a better dollar exchange rate– if you could work on that, that would be very helpful. But you know, there are so many compelling reasons for traffic to move in both directions at this time of year– Thanksgiving, Christmas, holiday season, et cetera– that it’s going to continue. And it will be strong certainly, through to the second week of January.

– All right, we will leave it there. John Grant, Senior Aviation Analyst with tracking service OAG. Thank you for your time on this Black Friday.