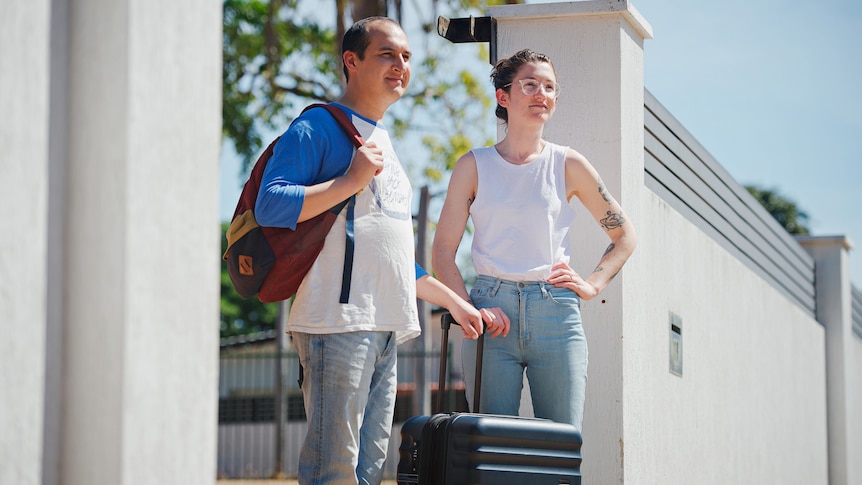 After coming to Darwin for what was supposed to be a week-long visit, Melbourne locals Erin Watkins and Mick Porter are still stranded, almost a week after they were supposed to fly home.

“I was a bridesmaid for a wedding on Friday and then the reception part was on the Sunday and I missed both of those,” Ms Watkins said.

“It was pretty shattering.”

They are among hundreds of people who have become stranded in the NT due to a high volume of flight cancellations by Qantas and its budget subsidiary Jetstar.

And like so many others, they are stuck waiting up to a week for the next available flight home.

The couple received a text from Jetstar last Wednesday afternoon to inform them that their flight — which was due to leave in the early hours on Thursday morning — had been cancelled.

After spending hours trying to contact the airline online and over the phone, they travelled to the airport where staff told them the next available flight was in a week.

“Even if we did want to pay with another airline there just wasn’t any [alternative flight],” she said.

“When we realised it would be a whole other week we were quite stressed because we were really worried about our jobs.”

The couple are stranded at a time when Darwin is facing an accommodation crunch amid a busy tourist season and widespread staff shortages.

“We’re just very lucky that we had somewhere to stay up here,” Ms Watkins said.

Tourism Top End General Manager Glen Hingley said other tourists had not been as lucky, and had been scrambling to find last-minute accommodation or alternative transport with limited assistance from the airlines.

“The information centre here has been inundated, and still is, with people trying to seek alternative arrangements,” he said.

“There was a time when Qantas and Jetstar and other airlines had staff here on the ground.

“Not saying ‘here’s a voucher’ through a text message, ‘find your own way around Australia’ — that’s not the way we operate.

“It shouldn’t be up to the team at the Darwin Visitor Information Centre and hotel desks and tour companies and attractions to [have to deal] with these challenges.”

Mr Hingley said he was concerned about the “reputational damage” that the cancellations have done to the Northern Territory as a destination for tourists.

“There’s a lot of upset people up here getting around because they don’t know how they are going to be able to afford their six days [accommodation], they’re looking for alternatives and what looked like a good attractive proposal … when they made the decision to come up here has now become quite the expensive one,” he said.

Acting Chief Minister and Tourism Minister Nicole Manison told ABC radio she was going to meet with representatives from Qantas group on Tuesday.

She called on the company to “take care of the regions”.

“My message to them is the impact they have on a place like the NT is far greater than they would with changing flights in Sydney and Melbourne,” she said.

“They’re meant to be the national carrier, they’re Qantas, and they do own Jetstar and they need to do a better job.”

‘Resourcing challenges’ to blame for cancellations

A Qantas group spokesperson said in a statement that the cancellations were due to “ongoing resourcing challenges, which are similar to those faced by other airlines and the aviation industry around the world”.

“We sincerely apologise for the frustration and disappointment caused by these schedule changes, especially during the school holiday period,” the spokesperson said.

“We have been working with our Northern Territory partners and stakeholders to explore every option to minimise the impact to customers’ journeys.

“Customers impacted by these cancellations have been offered a range of options, including a refund or an alternative seat across Qantas and Jetstar services on the next available flights.”