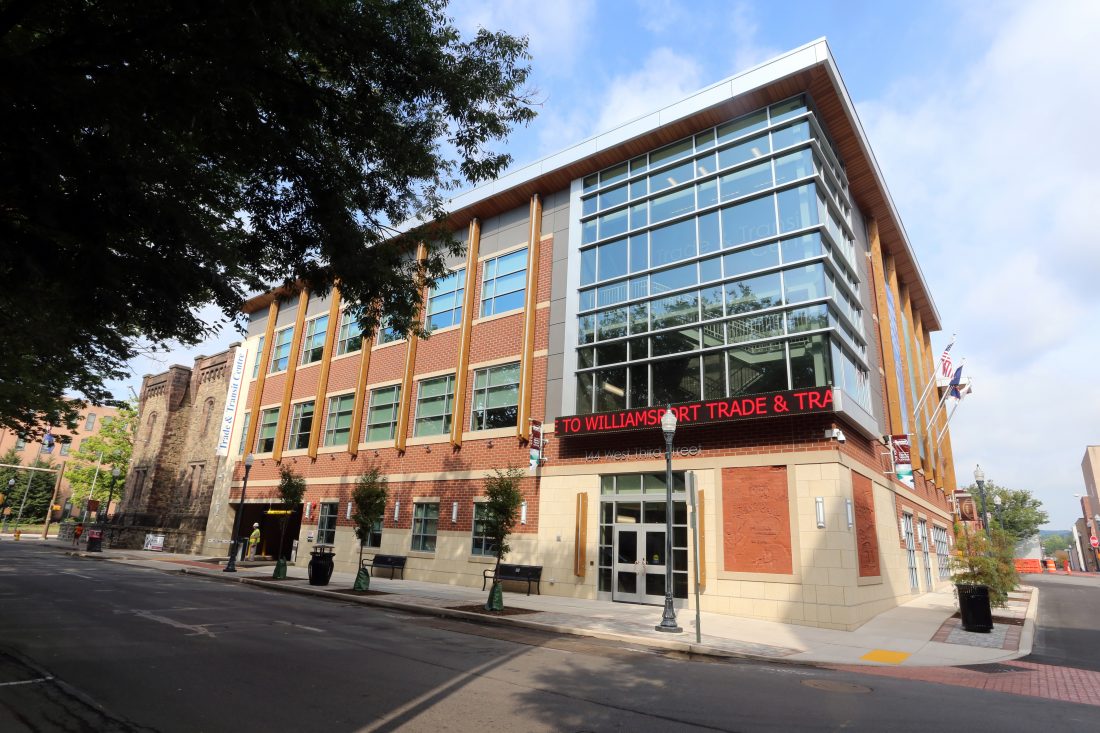 As the city wrangles with what to do with the multi-million dollar fix of condemned City Hall, the Trade and Transit I and II centres remain viable options for continuing city government operations, city officials say.

They have proven to be safe and accessible locations for city government to operate and conduct business and for non-profit organizations to be headquartered.

In all, $15.1 million in federal, state and local investment went into Trade and Transit Centre II, PennDOT records state.

“The Trade and Transit I and II buildings, which were built through state and federal transportation money, have proven to be valuable to the downtown business district in ways that go beyond the obvious one of being a public transportation hub,” veteran Councilman Randall J. Allison, former council president, said.

“They also supply much needed space for organizations like Uptown Music Collective, Community Theatre League and formerly the Williamsport/Lycoming Chamber of Commerce.

“There are larger and smaller rooms that accommodate meetings for public purposes including seminars, conferences, intergovernmental uses and the like as well as private rental opportunities.”

The conjunction of the two transit buildings, the parking deck, added parking in the lot behind Trade and Transit II, the Lycoming County Courthouse and county owned Third Street building have transformed the intersection of Pine and West Third Street aesthetically and functionally adding to the cohesiveness of Center City.

“I’m sure they will serve our city and region very well for years to come,” Allison said.

Trade and Transit Centre II’s construction funding began to arrive in 2009, when River Valley Transit received $1.9 million in federal funds, followed by $400,000 in PennDOT money, and $79,904 local contribution for $2.3 million, according to PennDOT records obtained by the Sun-Gazette.

The largest investment of capital did not take place again until 2013, when the federal government provided $4 million, the state, $833,500 and local contribution was $166,500, records state.

The Trade and Transit Centre I was constructed in 1999/2000 using PennDOT and FTA funds.

Alexis Campbell, press secretary at PennDOT in Harrisburg, said the department could not immediately fetch the investment totals for the McDade property.

City Hall costs to repair are estimated at $6 million on up. From the rain in a leaking roof in July came heavy damage.

The air ventilation system potentially drafting mold spores and the horrible odor resulted in Mayor Derek Slaughter to decide, after receiving a letter from Joseph Gerardi, city codes administrator, that it was unhealthy for the public and employees to remain inside the building, said Norman Lubin, city solicitor.

Voices and actions from the past

Now in his 80s, former Mayor Phillip E. Preziosi, who was mayor from 1992-1996, said he hoped for the best for Slaughter and the administration and could see his need for using the transit facilities and getting employees, including police, out of the City Hall.

Under Preziosi, the germination of the idea for the first trade and transit facility downtown was born.

While it was completed during the administration when Mayor Steven W. Cappelli, (1996-2000), was in office, Preziosi said the concept was the brainchild of his director of finance, William E. Nichols Jr., who was general manager of City Bus, the predecessor of River Valley Transit.

Nichols was let go by Slaughter days after Slaughter took oath of office.

“We thought it was the right thing to do at the time,” Preziosi said of building a transit building to serve more bus riders and to be a focal point for a downtown that, he said, was suffering losses due to the Lycoming Mall and other stores’ popularity.

Those days are long over, as the mall continues to lose stores and nears closing. Back then, however, city merchants and business community had to switch gears.

“The mall had taken a lot of business away from our merchants,” Preziosi said.

“Nichols was a master at getting grant monies as was his team of people,” he said.

The facility was named after the late U.S. Rep. Joseph McDade, whose connections helped to bring in federal grants for mass transit and other helpful grants.

The condition of City Hall — even before the most recent damage — was suspect, as Preziosi described a floor collapse on his watch.

One day before a Christmas break, the entire upper floor collapsed due to the weight of filing cabinets above the Sechler Meeting Room on second floor, Preziosi said.

It was a situation that might have resulted in injuries or worse, but fortunately the holiday party broke up before the collapse occurred, he said.

McDade was notified of the collapse and, through his connection with Nichols, was able to secure emergency funding to repair City Hall, Preziosi said.

Cappelli also recalled how, by 1999, the predecessor to River Valley Transit, City Bus, was averaging 3,800 daily passengers and experienced a nearly 20 percent increase annually in ridership.

Construction of a 34,000 square foot flatiron style building (Trade and Transit I) commenced upon receipt of a federal grant, Cappelli said.

The building resembled a wedge, with one side that could accommodate bus passengers and office space at the entrance on the Third Street side.

The building was completed, in large part, by the city using PennDOT and Federal Transit Administration funds, Cappelli said.

“One of the contingencies for receiving the federal transit dollars was the building would have to provide space for non-profits, which it did with the Community Theatre League which leased space as did the Williamsport/Lycoming County Chamber of Commerce,” Cappelli said.

The building fit into the plans for the downtown that was on the brink of a renaissance, he said.

Back then, the city and county leadership thought of ways to bring business downtown. Those ideas led to the formation of the Greater Williamsport Alliance in 2001 and the “lead partners,” a group of visionaries who were authorities of their era in government, business and the Chamber of Commerce.

Also involved was Our Towns 2010, a nonprofit organization whose goal was to formulate — with community support — a countywide vision, including incorporating art and culture into designs and plans for the future, Cappelli said.

During this period many individuals had a say as PennDOT was redesigning and replacing the Market Street bridge.

The McDade building was the headquarters of the Williamsport/Lycomng Chamber of Commerce until 2015, when the chamber relocated to the bank building at West Fourth and Pine streets, Cappelli said.

As the discussion continues on what to do with City Hall, city administration and council need to determine whether the rent it is paying and the maintenance it will need to perform on the transit facilities outweighs what costs it will take to repurpose City Hall for government use.

At the same time, the city is awaiting the outcome of a statewide grand jury investigation and probe by criminal agents with Attorney General Josh Shapiro into the use of state and federal grants by former management of River Valley Transit.

“It’s a shame,” Preziosi said of the damage to City Hall and the investigation into the previous administration’s handling of grants and finances. “I hope it all works out.” Next post The 10 Best All-Inclusive Ski Resorts to Visit